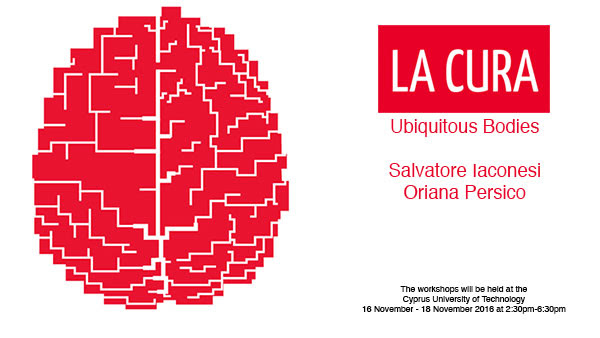 NeMe with the Visual Sociology and Museum Studies Lab and the Department of Communication and Internet Studies of the Cyprus University of Technology have launched an open call for participants from the arts, design, hacking, architecture, anthropology, technology, philosophy, and other disciplines.

The results from the workshop was included in the exhibition nEUROsis at the NeMe Arts Centre (19/11/2016-18/12/2016) and a PoD publication by the Leonardo Electronic Almanac.

Sciences and technology have enormous effects on the ways in which we perceive our body, our interconnectedness with the rest of the world – whether human or non-human -, our health and well-being. LaCura is an open, participatory performance whose aim is to create a social space which links technologies and networks, but also proximity, solidarity and human relations.

When he was diagnosed with a brain cancer in 2012, Salvatore Iaconesi launched La Cura, a global performance, uniting arts, sciences, technologies, design and the whole of society to reframe the meaning of he word “cure”. Going beyond the biopolitics of medicine, data, bureaucracy and administration, the cure was taken back into society, confronting with the world’s complexity and diversity to create a collaborative cure in which everyone has a role and solutions come from the interconnection of approaches, sensibilities, techniques, disciplines, practices, strategies and tactics.

Biographies
Salvatore Iaconesi is an interaction designer, robotics engineer, artist, hacker. TED Fellow 2012, Eisenhower Fellow since 2013 and Yale World Fellow 2014.
He currently teaches Interaction Design and cross-media practices at the Faculty of Architecture of the “La Sapienza” University of Rome, at ISIA Design Florence, at the Rome University of Fine Arts and at the IED Design institute. He produced videogames, artificial intelligences, expert systems dedicated to business and scientific research, entertainment systems, mobile ecosystems, interactive architectures, cross-medial publications, augmented reality systems, and experiences and applications dedicated to providing products, services and practices to human beings all over the world, enabled by technologies, networks and new metaphors of interactions, across cultures and languages. His artworks and performances have been featured worldwide at festivals and conferences.

Oriana Persico holds a degree in Communication Sciences and is an expert in participatory policies and digital inclusion. She is an artist and writer.
She has worked together with national governments and the European Union to the creation of best practices, standards and researches in the areas of digital rights, social and technological innovation, Digital Business Ecosystems (DBE), practices for participation and knowledge sharing. Oriana writes critical, scientific, philosophical and poetical texts that connects to technological innovation, and on its cultural, sociological, economic and political impacts. She is an expert on the formal analysis of cultural and social trends, with specific focus on social networks. She creates breakthrough communication campaigns, performances, research methodologies and strategies.